Disruptive innovation: what it really means to the construction sector

On 9 July 2019 the London Project Data Analytics welcomed Jaimie Johnston, Head of Global Systems for Bryden Wood, to deliver a talk on how disruptive innovation was being applied to the construction sector.

Jaimie started by providing an overview of the challenges facing the industry, particularly the fact that an additional 2.5 billion people will be living in cities by 2050. He concluded that in order to meet this challenge the industry would need to adopt a different approach.

The slides for the event can be found here 19.07.09 Bryden Wood_Automated design_attendees (1)

The video can be found here.

His first case study was centred around Circle Health where Bryden Wood had taken a different approach to the design of a hospital. Rather than create a detailed list of requirements, which can often conflict, they defined the challenge using a series of diagrams, representing different perspectives. They were then able to optimise the layout and design of each component, such as an operating theatre. By using a Design for Manufacture and Assembly (DfMA) approach to the design they were able to deliver a 28% reduction in cost, 20% saving in schedule, with 79% of standardised components available for subsequent projects. By capturing requirements in such a visual way, developed in collaboration with the client, they were able to rapidly optimise the design. A hugely impressive result.

The next case study summarised how Bryden Wood broken down the design of a production facility using a digital library of predefined stand alone equipment modules. This provided them with the ability to rapidly configure the facility and engage in design discussions with the client. Having captured the power, water and gas requirements for each module they were also able to model the utility requirements for the entire facility. They were also able to undertake scenario analysis on future production growth and understand how this would affect overall utilisation and the requirement for human operators. Overall, this enabled them to appraise options, optimise procurement and deliver better decisions.

They believe that a more Ikea inspired model of componentised construction has the potential to deliver a more practical solution. Essentially, they were advocating a colour coded Meccano type kit of parts, which could be constructed with low skilled labour. Not only does this provide a high level of performance and repeatability, it also reduces the overall demand for skilled tradesmen.

Taking the Meccano concept further, they had developed schemes for how to productionise the build process, particularly automated construction of components.

They had concluded that the industry needs to move beyond building information modelling towards a data lake that enables simulations, generative design, integration with IoT technology and digital manufacture. It also facilitates the capture of project delivery data and experience.

By taking an evidence-based approach to design they demonstrated a capability to rapidly configure schools. They also believed that by taking a ‘Platform-based’ approach they could bring consistency to how schools are constructed and drive down the costs of design and construction. They provided examples of how data analytics had influenced the optimisation of design, with interactive dashboards capturing parameters and design guidelines.

The school configurator app is now live at http://www.seismic-school-app.io/

The housing configurator for GLA is at https://www.prism-app.io/application.html

Another example was how they had created a Rapid Engineering Model, developed  with the Smart Motorways Programme for Highways England. that had the capability to automatically design the layout of a motorway, including the siting and construction of overhead gantries. By combining environmental and topographical data they were able to identify areas of risk and focus in the design; substantiated by evidence rather than intuition.

Better still, Bryden Wood had taken the decision to open source all of the tools that they had created, with the intention of creating a movement to think differently about how we design and construct buildings and infrastructure. Much of this thinking has now been captured within future government construction thinking.

A hugely impressive and entertaining talk that highlights how a data centric approach to design and manufacture can really disrupt conventional thinking. There is a lot of read across to other industries, but the biggest observation for me was how this would impact a vast number of roles, from architecture through to construction. Although it can take time for this thinking to disseminate, it was clear that their approach will disrupt an entire sector.

Martin Paver is CEO/Founder of Projecting Success. In Dec 2017 he saw the opportunity to transform how projects could be delivered through the application of advanced data analytics and founded the London Project Data Analytics meetup, which has expanded throughout the UK and has grown to a community of ~3000 people. He delivers strategic and tactical solutions that integrate project management and leading edge data science and analytics. 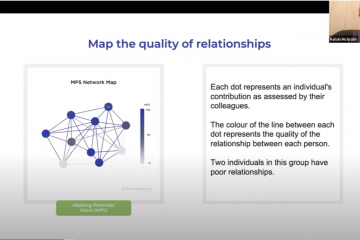 Using AI to manage the human side of projects

On 1 April Kelvin McGrath from Meeting Quality delivered a talk on how we can use data to understand the human side of projects and how this can provide lead indicators on project performance. The Read more… 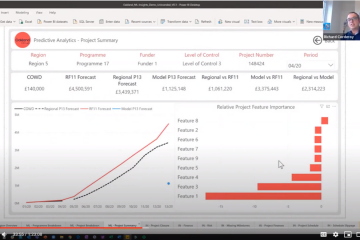 A big thanks to Richard Corderoy from The Oakland Group for his presentation at the Project Data Analytics Community meetup on 29 April. We had a record attendance of ~150 people. Richard provided an overview Read more… 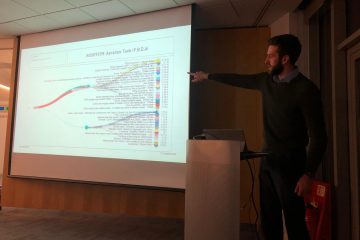